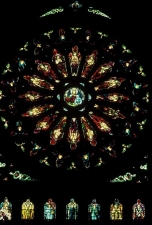 The large rose window in St George, Perry Hill had been severley vandalised while it remained unprotected in the redundant Church. A new Church was being built on the same site nearby incorporating stonework designed to accommodate the window and so we had to replace the areas of glass that had been broken or missing entirely.

The panels below are a part of a scheme of seven panels representing the Order of Archangels located beneath the Rose measuring 30 feet in diameter. 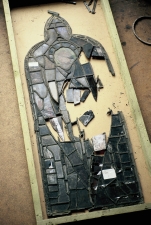 The Angels had all suffered degrees of vandalism and when they arrived at our studio in trays after being stored at another studio we discovered the window had been made at Henry Holiday's own studio in Hampstead and were made in his mosaic style.

Holiday had visited America and been impressed by the work of Lafarge and in the early 1890se he decided to double up with two layers of glass in places to make the glass darker or to mix the colours.

Fortunately we found a photograph of the window but could only enlarge it to a certain size before it blurred beyond recognition. We had to use the remaining leads, mostly stretched and distorted, and loose pieces of glass to work out the design of each panel.

Holiday used mixed colours i.e. a variety of different yellows to create a yellow robe and so we had to extensively analyse his palette to select the replacement glass.

Holiday was also experimenting with a new type mouth blown English Antique Glass and Priors Early English Slab recently introduced by Britten & Gilson of Southwark. We were able to match  the glass from our stock some of which was contemporary with the window.

The panels above and below show the importance of matching  the colour and types of glass correctly. Matching a colour will not achieve the correct result unless the type of glass is as close to the original as possible.

Drawings of the missing sections of glazing had to be produced after which the glass painting could begin. The original faces and hands and other glass painting was the work of William Glasby who had painted Holiday's designs at James Powell and Sons and had followed him to Hampstead to become his foreman.

Glasby was masterful at painting a combination of soft matts and line that enabled him to match the house style of Morris & Co when he worked for the firm at Merton towards the end of his career.

Combining drawing, glass selection and glass painting was essential for the last   panel of the Archangel Michael (left) because all that remained was a single piece of glass. In fact we had to replace a small Henry Holiday window from scratch and would have found it daunting to do without familiarising ourselves with his approach to Stained Glass during the previous restoration.

The remaining traceries and 'petals' of the Rose also needed extensive restoration.