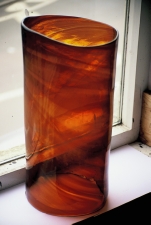 A Muff or cylinder of mouth blown English Antique Streaky Glass manufactured by Hartley Wood of Sunderland circa 1970. The Muff is cut along its length and then placed in an annealing chamber where it cools and flattens. 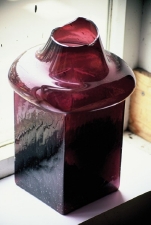 A Hartley Wood Slab Bottle made by blowing glass into a metal mould. The top of the bottle would be cut off immediately after coming out of the mould to be recycled and afterwards the bottle is  cut up into four sides and a base. It was presented to Carl Edwards who made the Great West Window of Liverpool Anglican Cathedral entirely out of Hartley Wood slabs. 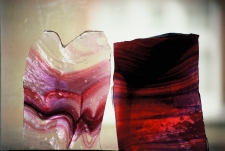 Two examples of Priors Early English Slabs manufactured circa 1900 and found in the Fulham Glass House. The streaks, imperfections and richness of the glass made it ideal to use in Arts & Crafts windows. Priors Glass was first blown in 1889 by the firm of Britten & Gilson of Southwark, London. 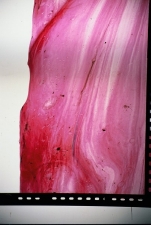 A sheet of mouth blown Gold Pink, English Antique Glass 1900-1920 manufactured by Chance. It was found hidden in a dark corner of the Lowndes & Drury's glass racks at the Fulham Glass House. The imperfections help to refract the light as it passes through and allows the window to glow in the same manner as medieval glass. The streaks and variegation of colour offers the glass cutter wider opportunities than a sheet of flat and evenly coloured glass. 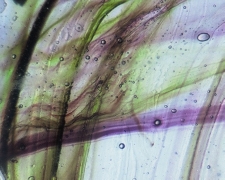 A closer view of a Priors Slab showing the variety of streaks and bubbles. The thickness and structure of the glass allows it to diffuse light in a unique manner and makes tinted and white Slabs ideal for plain glazing as well as being used in conjunction with painted and coloured glass. 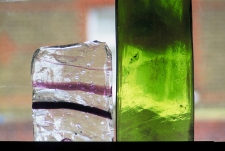 In the photograph (right) a Priors Slab is placed next to the side of a square Kilner jar showing how they diffuse light in a similar manner. Victor Drury of Lowndes & Drury had crates of the square preservative jars delivered to the Glass House and his glaziers would separate the sides during slack periods. The colour of a Kilner jar deepened towards the base where the glass was thicker and other firms of glass and bottle blowers blew white slabs varying in quality. But the specialist companies such as Britten & Gilson, James Powell & Sons, Chance and Hartley Wood manufactured the quality pot colours, streaky and flashed glasses. 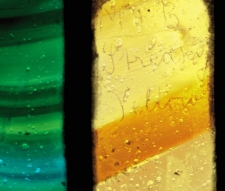 The glass sample (left) found in the Glass House, has the initials M & B scratched into its surface, believed to stand for May & Baker, a company that took over the Vauxhaull based  glass manufacturer Jesse Rust who supplied pot and streaky colours to a variety of glass artists from the 1860's. He also supplied glass for mosaic designs. 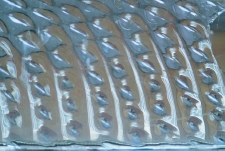 The glass (right) known as Venetian, is made by blowing the glass into a cone shaped metal mould that has a clockwise shaped spiral inside. The glass is removed with the imprint of the mould and placed into another cone with a counter clockwise spiral which provides the muff and final sheet with a lozenge pattern. Each sheet of Venetian is slightly different as can be seen in the foyer of the National Portrait Gallery. 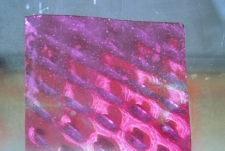 The Gold Pink sheet of Venetian (left) is an example of the extensive range of coloured glass available to Stained Glass artists in the early part of the 20th century. Although Venetian was used in decorative glazing at an earlier date it was only adopted in Stained Glass windows towards the end of the 19th century. 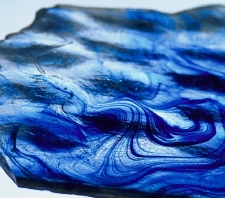 The streaky Pressed Slab (right) was made by pouring molten glass into a wooden mould and pressing down a wooden lid with an indented surface. The undulating imprint produced a slab that was not as brilliant and clear as mouth blown glass but still diffused and held transmitted light in a unique manner. William Blake Richmond included Pressed Slabs in his windows made in the 1890's for St Pauls Cathedral later destroyed in WW2. The slabs and windows were both made by James Powell & Sons. 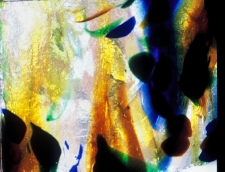 The Pessed Slab (left) was made at James Powell and Sons in the 1940's. I was told by Peter Skirten, a glazier who was present at the time, that molten glass was poured onto a wooden mould and mineral ores were scattered onto the surface and dragged and agitated to create the distinctive streaks and blobs under the instructions of Leonard Walker, the Stained Glass Artist. 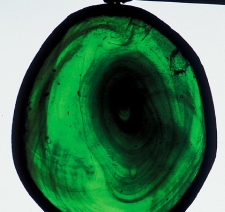 The slab (right) is sometimes called an 'HH Slab' but we know it as a Henry Holiday 'Puddle'. Henry Holiday relocated his Hampstead studio to the Fulham Glass House when it was built in 1906, with William Glasby as his foreman. The Puddles were made by melting glass in a pot and pouring it onto a metal tray in the hope that it could be used after cooling, but annealing was hit and miss. It was included in his mosaic styled windows in small and mostly unpainted pieces.